Tom Yum Kung is a Thai soup, usually cooked with shrimps. It is widely served in neighbouring countries such as Cambodia, Brunei, Malaysia and Singapore, and has been popularised around the world.
The words "Tom yam" are derived from two Thai words: "tom" and "yam". "Tom" refers to boiling process, while "yam" refers to a Thai spicy and sour salad. Indeed, tom yum is characterised by its distinct hot and sour flavours, with fragrant spices and herbs generously used in the broth. The basic broth is made of stock and fresh ingredients such as lemongrass, kaffir lime leaves, galangal, lime juice, fish sauce, and crushed chili peppers.
Beef Green Curry, the name "green" curry derives from the color of the dish, which comes from green chillies. The "sweet" in the Thai name (wan means "sweet") refers to the particular color green itself and not to the taste of the curry. As this is a Thai curry based on coconut milk and fresh green chillies, the color comes out creamy mild green or, as this color is called in Thai, "sweet green". Its ingredients are not exactly fixed. The curry is not necessarily sweeter than other Thai curries but, although the spiciness varies, it tends to be more pungent than the milder red curries. 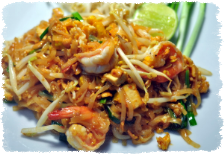 Pad Thai/Thai Style Fried Noodle, Pad Thai is a stir-fried rice noodle dish commonly served as a street food and at casual local eateries in Thailand. It is made with soaked dried rice noodles, which are stir-fried with eggs and chopped firm tofu, and flavored with tamarind pulp, fish sauce, dried shrimp, garlic or shallots, red chili pepper and palm sugar, and served with lime wedges and often chopped roast peanuts. It may also contain other vegetables like bean sprouts, garlic chives, coriander leaves, pickled radishes or turnips, and raw banana flowers. It may also contain fresh shrimp, crab, squid, chicken or other proteins. Vegetarian versions may substitute soy sauce for the fish sauce and omit the shrimp.
Papaya Spicy Salad, Green papaya salad is a spicy salad made from shredded unripe papaya. It is of Lao origin but it is also eaten throughout Southeast Asia. Locally known in Cambodia as bok l'hong, in Laos as tam som or the more specific name tam maak hoong, in Thailand as som tam and in Vietnam as goi du du. Som tam, the Thai variation, was listed at number 46 on World's 50 most delicious foods compiled by CNN Go in 2011. The dish combines the five main tastes of the local cuisine: sour lime, hot chili, salty, savory fish sauce, and sweetness added by palm sugar. 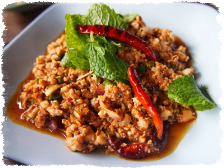 Chicken Spicy Salad is a type of Lao minced meat salad that is regarded as the national dish of Laos. It is also eaten in Isan, an area of Thailand where many people are of Laotian descent. Hmong people in Laos share the dish as well. Outside of Southeast Asia, larb is served in Lao, Thai, and Hmong communities in the U.S., France, and England. Local variants of larb also feature in the cuisines of the Tai peoples of Shan State, Burma, and Yunnan province, China. The word "larb", although now a cognate of the Laotian and Thai words for "luck", actually comes from a Lanna (Northern Thai) word meaning "to mince meat".
Massaman is not a native Thai word. It is generally thought to refer to the Muslims with earlier writers from the mid-19th century calling the dish "Mussulman curry"; Mussulman being an archaic form of the word Muslim. The flavors of the massaman curry paste (nam phrik kaeng matsaman) come from spices that are not frequently used in other Thai curries. Cardamom, cinnamon, cloves, star anise, cumin, bay leaves, nutmeg and mace would, in the 17th century, have been brought to Thailand from the Malay. These are combined with local produce such as dried chili peppers, cilantro (coriander) seeds, lemongrass, galangal, white pepper, shrimp paste, shallots and garlic to make the massaman curry paste. Massaman is usually eaten with rice, in a meal together with other dishes. There are also traditional versions using oranges, orange juice, or pineapple juice as additional ingredients. 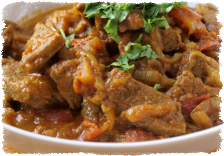